This post is the second in a series to keep our family and friends updated about the back yard renovation project we're doing this year.

Although we haven't seen the usual construction crew of Ron and Roger here since before the 4th of July weekend, a few things got done in July.

It was great to have the doors and windows arrive, although we're still waiting on one item: the big south-facing bay window for the extended kitchen nook. That's currently expected to arrive in mid-August, and once that's in they can take out the existing wall by the back door and finish the nook.

After the windows and doors arrived, we had another delay of a week because they need a lift to put the sunroom windows in. (Those windows are about 25 feet above the ground.) The construction boom this summer means all the lifts in the area were rented out, but on July 28 a lift arrived and they installed the sunroom windows the same day.

During the construction delay, a pigeon nest and a sparrow nest were building in the rafters of the sunroom. I removed the pigeon nest, which had two eggs in it – I wanted to get it out of there before they hatched and there were chicks who might not survive. I can't get at the sparrow nest because it's in the back of a tiny opening, but I think it has eggs and I hope they can seal things up before those hatch.

They're going to put white wooden siding on the sunroom to match the rest of the house. The price of that kind of siding is currently really high, so they bought lumber and are painting siding strips at their shop, which they'll install next week. The lift will be here until they get that done.

One of the items that arrived on July 21 was the custom door that will be installed between the parlor and the deck. It's bare wood with a window in it, and can be stained to match all of the woodwork in the parlor.

When they removed the siding where that door will be installed, we found a problem that needs to be addressed. There's a pipe running right through the middle of that opening, carrying hot water up to the radiator that heats our bedroom in the winter.

We had a plumber come out to estimate what would be needed, and they recommended replacing that hot water pipe with newer materials all the way back to the boiler in the basement, which would involved cutting through four walls and cost $5000 for the plumbing work plus construction work to patch all of those walls when they were done. Yikes!

A quick aside: we've learned that there are two kinds of plumbers when it comes to these old houses in Butte. Some want to replace all of the old stuff, and some are willing to work around it. In this case, our radiator system has worked great through 104 brutally cold winters, and we also happen to like the aesthetics of the massive steel pipes running below the ceiling around our basement. It reminds me a loft building in Chicago where I had an office long ago: I love that looks.

So we contacted our friend Tim Brown's Plumbing. He's the other kind of plumber, the ones who are willing to work around the old stuff and understand the "if it ain't broke don't fix it" mentality. Tim put in a long day cutting out eight feet of the existing pipe and running the same type of old steel pipe around the door opening, and now we're ready to install the parlor door. And it cost a fraction of the other plan. Thanks, Tim!

August 5: siding on the sunroom

After getting the long awaited windows in, this week was about finishing the siding on the sunroom. They've finished the south and east walls, and tomorrow they'll be working on the north side with a small covered porch area at the top of the stairs.

After the August update above, we had a few unexpected twists and turns and the progress of the project has slowed down. Long story, not worth getting into here, but we're hoping to finally get the rest of the concrete poured soon and get things wrapped up. I'll post photos of the backyard and kitchen as those get done. 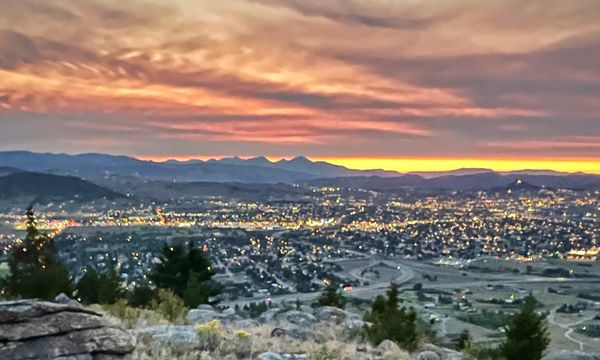 This evening after dinner, Nancy and I went for a hike up to Maud S Canyon viewpoint. We started about an hour before sunset, so I knew we'd be coming down in the

There's an area of the United States that has played a unique role in enabling the use of modern technology across North America, attracting workers from around the world and creating unparalleled wealth